From Cannonball Run to Kings of Speed 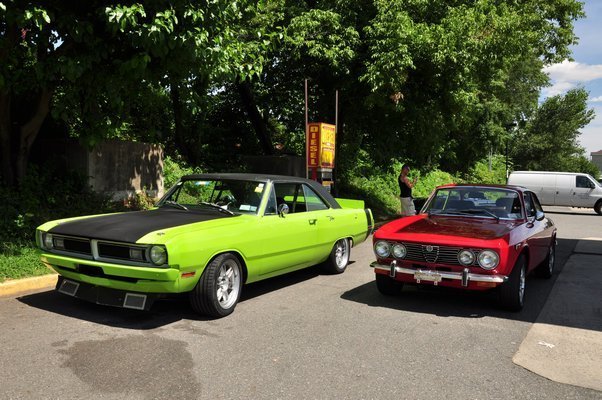 The engines purr with raw power and beauty, vibrating under the hoods of the speed demons parked inside the Red Ball Garage in Manhattan.

The drivers hop in the seats of their Ferraris, Jaguars, Corvettes, Challengers; their feet hovering over the gas pedal and clutch.

On their marks. Get set.

This is the Cannonball Baker Sea-To-Shining-Sea Memorial Trophy Dash—better known as the “Cannonball Run”—an illegal, coast-to-coast automobile race that ground to a halt three decades ago after five successful rips across the country in the 1970s.

In August, the network enlisted the help of Bridgehampton Autosport owner Justin Mancino for the Cannonball Run segment of its two-part, adrenaline-fueled documentary, “Idris Elba: King of Speed,” which is slated to air in the United States sometime later this year.

Mr. Mancino, a car enthusiast and race car driver, naturally obliged. Anything the BBC needed was theirs, he said. And, in this case, it was six vintage automobiles. In pristine condition.

BBC was going to stage its very own Cannonball—narrated and led by Brock Yates Jr., the son of the race’s founder. Mr. Elba—an English actor best known in the U.S. for his portrayal of Russell “Stringer” Bell in “The Wire” television series—would ride shotgun with Mr. Yates in a 1972 Dodge Challenger built specifically for that year’s run. They charged through the streets of Manhattan, where the race began in 1971.

Mr. Mancino had a week to find a classic convoy to tail Mr. Yates and Mr. Elba, who recently earned a Golden Globe nomination for Best Actor for his portrayal of Nelson Mandela in “Mandela: Long Walk to Freedom.”

And, despite the time crunch, Mr. Mancino did. On his 46th birthday—August 15—he arrived on set with a half-dozen showstoppers: two of his own cars, a green 1970 Dodge Dart and a white 1973 AMC Javelin; a red 1972 Alfa Romeo GTV, belonging to his aunt, Debra Robusto; a white 1967 Pontiac GTO convertible; a black 1956 Ford Thunderbird convertible; and a gray 1972 Corvette Stingray.

Then, they got to work, re-creating a race that once captured the attention of America and was popularized in the Burt Reynolds 1981 film “The Cannonball Run.” And, last summer, the racers turned heads everywhere they drove.

“It was kind of crazy because, in the city, you just don’t see that. You don’t see those kinds of cars,” Mr. Mancino, who was driving his Dart for the Run, said last week from his Bridgehampton garage. “And not all bunched up together, either.”

“There was traffic and you could see the multitude of people attracted to us,” his wife, Janet, who was in the Stingray, added. “‘Oh my God, look at those cars!’ It was just so much fun.”

In its heyday, the Cannonball Run was actually an act of civil disobedience—a knee-jerk reaction by car journalist Brock Yates to talk of speed restrictions. Road traffic accidents in the 1960s were reaping more than 30,000 deaths annually and the United States government was under pressure to act. They proposed lowering interstate speed limits from 70 to 55 to create safer roadways, drawing harsh criticism from car enthusiasts nationwide—Mr. Yates among them.

He was determined to prove the lawmakers wrong.

“The Cannonball was started for two reasons: to prove that good drivers could traverse long distances at high speeds safely, and the other one was an opportunity to say, ‘Speed limits? We don’t need no stinkin’ speed limits,” Brock Yates Jr. explains in the documentary to Mr. Elba. “It was a protest against the 55.”

The Cannonball Run was born on May 3, 1971. Packed with a small piece of luggage, water, fruit juices, stacks of $1 bills for gas and many chocolate bars, the senior Mr. Yates hopped into his 1971 Dodge Custom Sportsman van, called the “Moon Trash II,” with his friends, Steve Smith and Jim Williams, and his teenage son.

“So you did the first one?” Mr. Elba asked Mr. Yates in the documentary film.

“How old were you?” the actor said.

“I was the navigator,” Mr. Yates said. “There were supposed to be more cars, but they all dropped out last minute. And then everybody found out how much fun we had.”

In the fall of 1972, the senior Mr. Yates and co-driver Dan Gurney won the second run in a Ferrari Daytona. It took them 35 hours and 54 minutes to travel 2,863 miles—an average of approximately 80 miles per hour.

Mr. Gurney was interviewed at the finish line, where the American racing legend put it best: “At no time did we exceed 175 miles per hour,” he said.

It was the world of “Dukes of Hazard,” “Starsky & Hutch” and “Smokey and the Bandit,” Mr. Elba, a self-proclaimed speed freak, explained in the film. Through them, and races like the Cannonball Run, the car became a global star in its own right. And, since the dawn of the automobile, people have risked their lives to go faster, he said.

“When I was 6 years old, I used to sit in the back of my dad’s Cortina with a hanger and drive, pretending that hanger to be a steering wheel,” Mr. Elba recalled in the film. “By the time I was 14, I realized I had an obsession with speed. I bought myself a car and that was it. Never looked back. Now, I’m going to race and rally across the world, meet legends, professional drivers, people obsessed with speed—like me.”

And like Mr. Mancino, a Sag Harbor native who grew up in and around race cars, just a mile from the former Bridgehampton Race Circuit. On Friday nights, he could hear the engines starting up at the track and would beg his family to take him.

“That was what got me going. I had to go up there and see them. It’s kind of hard to explain,” he said. “It’s just one of those things you like. Some people like art. I like car art.”

The car enthusiast and his aunt, Ms. Robusto, come from a race car family, she explained last week during a telephone interview. Driving during the documentary shoot was a thrill, she said, as was talking over a two-way radio with Mr. Yates and Mr. Elba.

“We just had fun with it,” she said. “It was invigorating, for sure. But exhausting while we were driving because none of these cars had air conditioning and, of course, it was the hottest day on Earth. But we had a blast, just to be involved with the crew and the son of the original driver. And then, of course, let alone Idris. All of a sudden, every time you turn around, he’s everywhere you go. It was like, ‘Oh, I didn’t realize.’”

Despite the actor’s success, he was still extremely humble on set, Mr. Mancino said.

“He was great, very friendly,” he said. “He was upbeat, very likable and sociable. And all the girls got to take pictures with him. So they were all happy.”

Due to the nature of the race, filming was over in a flash—starting on August 15 and ending the next day on August 16. Soon after, the cars were loaded up and transported back to the East End. The Cannonball reenactment was over, leaving Mr. Mancino with 15 minutes of fame and wondering whether he would ever participate in the real deal.

He has settled on a resolute “no.”

“It’s all about technology now,” he explained. “The guys that are doing it, you have to see their cars. It’s like a cockpit of a 747. They have spotters—airplanes—scouting for cops. They’ll have a plane doing their route ahead of them. You don’t want to get caught, you know? Do not want to get caught. At times, they’re probably going 140, 150.”

The underground race no longer goes by the name “Cannonball Run” because it doesn’t exist, Mr. Mancino reported. Today, Car and Driver magazine now sponsors a legitimate, closed-course tour—the “One Lap of America.”

“When the Cannonball happened, yes, it was a lark. Yes, it was stupid. Yes, it was all kinds of things,” Mr. Yates says in the film. “But it captured the American imagination. I mean, there hasn’t been a Cannonball for 30 years but, still, that’s what people think about. Anytime that somebody’s out having a run with their car, driving quickly, it’s the Cannonball.”

Outlaw successors in the United States, Europe and Australia continue to race and use the Cannonball name without the Yates family’s approval or permission.

They don’t need it.

They don’t want it.

And that’s the whole point.